Setting a static IP in Ubuntu is useful for a lot of things. You may want to forward ports from your router to serve web pages, use SSH from outside your local network or set up some sort of media server.

These instructions have been tested and confirmed with Ubuntu 16.04 LTS and Ubuntu 14.04 LTS but should be fine on other versions.

For whatever reason, Ubuntu is trying to make our lives easier by introducing graphical tools to be used by default but kind of making our terminal life a bit harder!

How to set a static IP in Ubuntu (the quick answer):

These instructions assume you are using a wired ethernet port to set a static IP on and already have an internet connection to create a static IP for (otherwise you would be finding it hard to read this right now!).

Using Ubuntu’s graphical interface to set a static IP (as described in my previous article about setting a static IP using nm-tool), uses some underlying tools that disable the manual / terminal method which most Linux users are more adapted to.

To regain control of our network interfaces we first have to disable nm-tools’ management of them. Type/copy the following command:

A few things to do:

Dnsmasq offers local DNS caching and network DHCP naming, both of which aren’t necessary on a standard workstation (Some may argue that local DNS caching is useful but I’ve always found Google’s DNS servers to be fast enough). More information on dnsmasq is available from Ubuntu Documentation [https://help.ubuntu.com/community/Dnsmasq].

I find the terminology for ‘managed’ a little confusing here because I have to set this to true to get Network Manager to recognise that I am actually managing this connection manually!

Which connection do I use for my static IP?

So, lets have a look at our current network information, open a terminal and type/copy the following command:

You will now be presented with all the available network connections (whether connected or not). Your output should look something like this:

What are the ifconfig connections?

To elaborate on the connections here:

Setting a static IP for a wireless interface is a bit different to the instructions contained here (to be covered in the future).

I will be using eth0.

What static IP should I use?

There are some IP ranges reserved for private use. These are:

The exact reason for these ranges is explained *more clearly* on wikipedia.

What is my Network Gateway?

In most residential broadband set-ups, this will be the router provided by your Internet supplier. In commercial scenario’s, this could be a firewall or other routing device.

To find your current gateway type/copy this command:

The output will show a line containing the word ‘default’, the IP on this line will be the IP of your Network Gateway… sometimes used interchangeably with Default Gateway (sometimes incorrectly).

What is my Netmask / Subnet?

A subnet is used to divide a network into logical groups – subnetworks. A Netmask specifies the boundaries of a subnetwork. The exact methods in which it does this are outside the scope of this of this post (maybe one for the future!).

To find your subnet, use ifconfig again. Type/copy the following: (REPLACING <iface> with the interface currently connected to the internet eg. wlan0 or eth0)

DNS (Domain Name Servers) are like indexes which resolve the domain name to an IP. I primarily use Google’s Public DNS but you may choose to use your gateway IP to let your router deal with DNS. 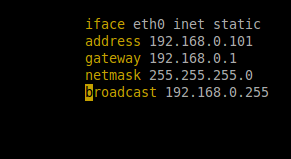 To specify a static connection we need to add the information we gathered above to /etc/network/interfaces.

My /etc/network/interfaces file (on every distro I’ve tried so far) was pretty much empty by default (as below), if you have something more you should be careful with removing entries, start by commenting out lines (using #) to see exactly what you are using.

What do I change in /etc/network/interfaces?

There are 5 items to add to this file:

Open your /etc/network/interfaces file for editing by typing/copying the following:

Finally, restart your networking services to put your new settings into effect.

Restarting networking for Ubuntu 15.04 and higher

Since Ubuntu 15.04, the init daemon system was fully changed to systemd, this includes the latest LTS release, Ubuntu 16.04. Though the previous upstart commands are still usable in many cases you should start to use the newer syntax:

Restarting networking for Ubuntu 14.10 and lower

Restart the following services with the previous syntax typical of upstart:

This should restart your network interfaces and services. Use ifconfig to confirm your new static IP!