Opening a terminal isn’t as important as it used to be in Ubuntu. Ubuntu is quite user friendly now (though some would argue it is moving against that with it’s unity interface!) but using a terminal is still as powerful as ever!

The quickest way to open a terminal in Ubuntu (as always) is the keyboard shortcut, press: 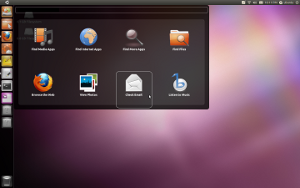 Ubuntu is installed with the Unity dashoard as standard which can be accessed by clicking your unity icon (usually in a sidebar on the left of your screen – as the picture) and as you type “terminal” it should display the terminal icon for you to click and open.

Some of you may have Gnome3 Shell installed, like unity, you can type “terminal” into your Shell Gnome3 Shell search box (usually top right of your screen) and the icon should appear for you to click and open.